The evolving areas of nanoneuroscience have recently opened doors to a multitude of possibilities for neuroscientists to contribute to a deeper understanding and investigation of neuronal function associated with brain disease. Nanoscience has provided vast hopes for the medical sciences in comparison with the classic techniques of pharmaceutical drug design and development. The collaboration of the two fields has already changed the landscape of diagnostics and therapeutics in the nervous system. These successes prove that nanoneuroscience if studied further, holds promise to deepen our understanding of neural circuitry and therefore contribute to initiatives such as the BAM Project.

Diagnostic and Therapeutic Applications of Nanotechnology in Neuroscience

The applications of nanotechnology to drug delivery have been widely studied in vitro and in preclinical assessments and provide alternatives for the treatment of CNS disorders. Nanoliposomes may be one of the first nanomaterials used for drug delivery. The ability to make nanomaterials multifunctional to enable targeted therapies may be one of the greatest advantages of nanotechnology. Targeted therapy has also been achieved using magnetic nanoparticles (MNPs). Although cell targeting is critical in successful chemotherapy, another important factor for effective drug delivery is the pharmacokinetics of the nanomaterial. Additionally, successful drug delivery is highly dependent on the rate of release of the drug from its carrier. Nanogels, which are hydrogels composed of cross-linked ionic and nonionic polymers, can permit steady, controlled drug release.

Neuroprotection refers to the mechanisms or strategies that slow disease progression by preventing or slowing the further loss of neuronal. These strategies include reducing oxidative stress, introducing growth factors, introducing anti-apoptotic peptides, and reducing excitotoxicity and neuroinflammation. One approach generally involves the use of nanomaterials loaded with antioxidants. Nanomaterials with antioxidant properties, such as cerium oxide NPs, can also preserve system endogenous antioxidants. An oxygen-responsive nano-polymer platform called oxygen-reactive polymer (ORP) could be used for diagnosis and treatment to reduce ROS production in brain trauma.

One of the areas most closely related to nanotechnology is regenerative medicine. Compared with traditional materials, nanomaterials have superior mechanical, catalytic, conductive, optical, magnetic, and cytocompatibility properties, and show great promise in tissue neuroengineering bio-composites. 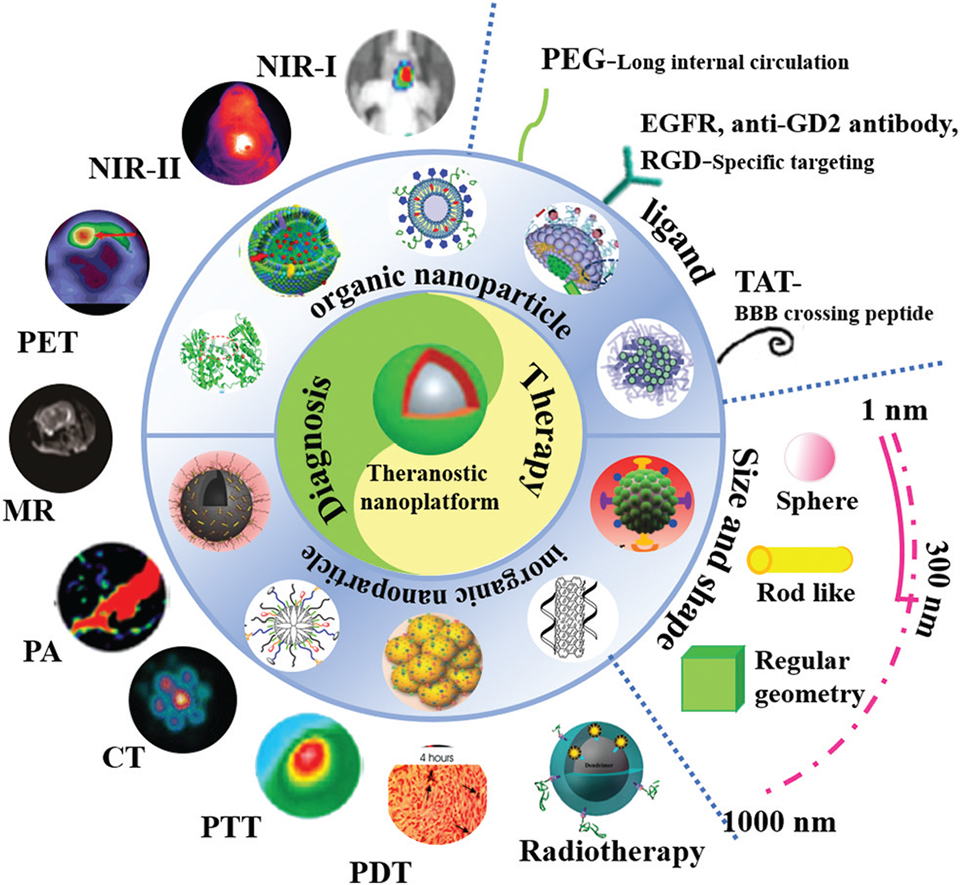 Nanotechnology permits the visualization of experimental data through optical imaging, resulting in greater spatiotemporal accuracy and resolution than ever before. One conceptual framework is the functionalized semiconductor nanocrystals known as quantum dots (QDs). The potential for QDs is expansive and ever-growing. New functionalization and labelling methods to better target surface proteins or promote their superior solubility characteristics have been developed and assessed using labelled AMPA receptors and by measuring the cytotoxicity of hippocampal neurons, respectively. Utilizing nanomaterials for optical imaging also holds promise for better visualization of brain injuries, such as TBI.

Some areas of interest in nanomaterials in the field of neurosurgery include nano-electromechanical systems (NEMSs), laser-associated vascular anastomoses, nanoscaffolds for neural regeneration, the biocompatibility of surgical prostheses and nanowires. One promising recently developed NEMS is the "NanoKnife" used in irreversible electroporation (IRE), a novel non-thermal ablation technique. An interesting nanomaterial that can be used in place of lasers is AuNPs, which have been shown to have excellent photo-thermal properties.

Nanoneuroscience integrates what is known about the nervous system and nanotechnology, two swiftly progressing fields. The combination of the two disciplines may provide a solution for many CNS disorders, from neurodevelopmental disorders to psychiatric disorders and motor and sensory disorders. Research on the properties and functions of nanomaterials will become the backbone of nanoneuroscience.

As a leading international neuroscience research company, Creative Biolabs has professional scientists with neuroscience and nanotechnology backgrounds who can provide professional support for your project development. Please feel free to contact us for detailed information.