Introduction of Breathing and Neural Network

Breathing is a continuous and rhythmic behavior precisely controlled by the nervous system. The neural network guides the muscles to form the walls of the chest and abdomen and creates a pressure gradient that moves air in and out of the lungs. This process can not only maintain homeostasis under different conditions but also support fundamental human behaviors, such as emotional expression, voluntary or cognitive control of breathing. The homeostasis of oxygen and carbon dioxide in the lungs is regulated by breathing movement, which is produced by neural networks in the central nervous system (CNS). The complex movement of the peripheral respiratory organs can further regulate this homeostasis.

It has been proven that the generation of breathing rhythm is mainly related to the preBtzinger Complex (preBtC) and the retrotrapezoid nucleus/parafacial respiratory group (RTN/pFRG) in the principal brainstem regions. The higher brain centers, including the amygdala, cortex, and hypothalamus, provide signals for the emotive and volitional control of breathing. A single preBtC neuron can generate tonic spiking, bursting, and silence which is associated with breath-holding, breathing, and apnoea respectively.

There are different experimental studies for the respiratory network. Mathematical and computational models have been widely used for a series of experimental studies of the neural network. As the breathing rate varies from species to species, it is necessary to transfer animal models to human models. However, we cannot measure or estimate the parameters in the human body model makes this process difficult.

Using the Boolean network, the logic of breathing neural network operation is explained. The network can also mimic respiratory neural networks, as well as control the inspiration and expiration times. With a better understanding of pattern generation and control of breathing rhythm, it would be helpful for the treatment of cardio-respiratory diseases. 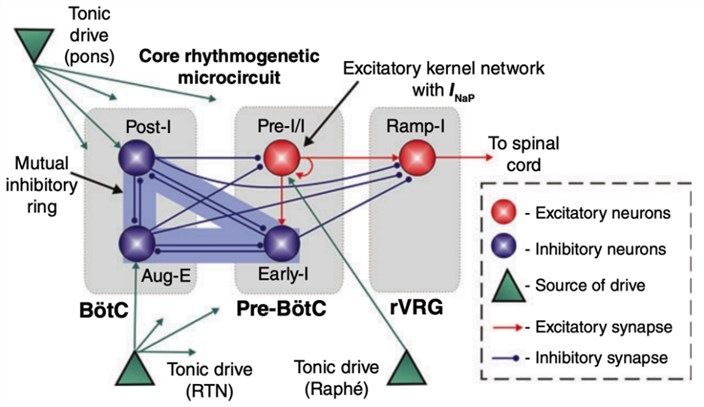 Fig.1 Schematic representation of the spatial and functional organization of key neural structures and core circuits of the mammalian brainstem respiratory CPG. (Molkov, 2017)

Creative Biolabs is one of the well-recognized experts who are professional in applying advanced platforms for a broad range of neurosciences research. We are pleased to use our extensive experience to offer the best services and the most qualified products to satisfy each demand from our customers. If you are interested in our services and products, please do not hesitate to contact us for more detailed information.