Introduction of Pancreas and Neural Network 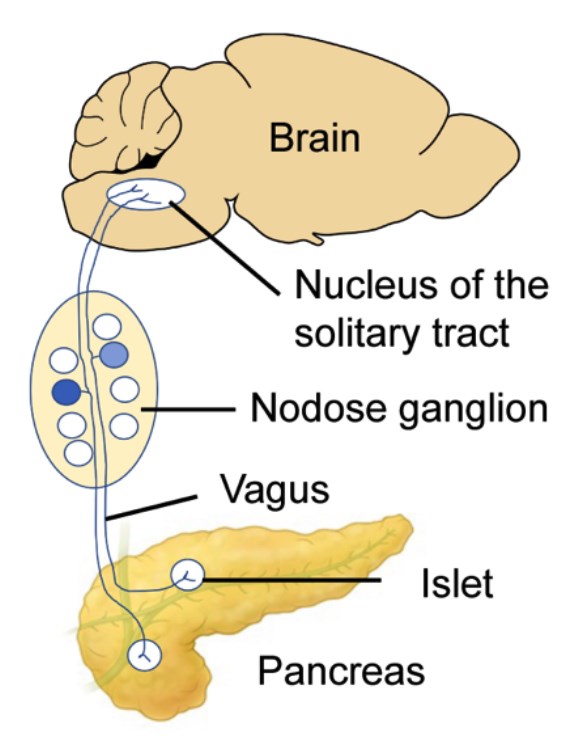 It has been reported that the brainstem plays a key role in the regulation of autonomic outflow to the pancreas. There are a series of neurotransmitters that regulate the pancreas.

GABA is the major inhibitory synaptic input that can also regulate vagal outflow to the pancreas. GABA produces tonic inhibition of pancreatic exocrine secretion and insulin release. Glutamate provides major excitatory synaptic input; it is one of the principal neurotransmitters in synapses impinging onto pancreas-projecting DMV neurons.

The release of PP is mediated by the vagus nerve. It has been shown that PP modulates PES, but not endocrine pancreatic secretions. In addition, nearly half of the identified pancreatic projection DMV neurons respond to PP.

Released from intestinal cells, it can bind to receptors on pancreatic cells to stimulate insulin release. According to actions on DMV neurons and pancreatic cells, GLP-1 can increase pancreatic endocrine secretions.

Serotonin, also known as 5-hydroxytryptamine, can regulate pancreatic secretions through direct and indirect effects. The interaction with CCK can regulate the neural control of pancreatic function.

The research of pancreas-brain's neural circuitry would be helpful for the development of selective drugs against specific diseases, such as pancreatic exocrine or endocrine dysfunctions, gastroparesis, and gastrointestinal reflux disorders. Creative Biolabs is one of the well-recognized experts who are professional in applying advanced platforms for a broad range of neurosciences research. If you are interested in our services and products, please do not hesitate to contact us for more detailed information.